In a second project, Stein and Grace Christ, a colleague from Columbia Univerity School of Social Work, have been coordinating a day-long leadership conference for social workers conducting practice or research in palliative care or hospice to be held on January 30, 2008 in Tampa, FL, prior to the annual conference of the American Academy of Hospice and Palliative Medicine. Support from the Academy will allow social workers to attend the one-day program at no charge. Christ & Stein are chair and vice-chair, respectively, of the newly formed Social Work Hospice and Palliative Care Network.

Interested in attending the SWHPN free pre-conference? Registration information here.
Posted by The CyberProf at 9:19 AM No comments: 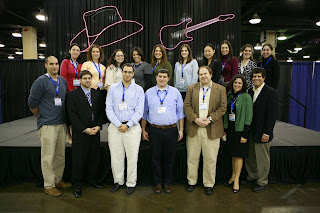 Between November 11th and 13th, 17 Wurzweiler students had the privilege to be among the nearly 4,000 participants at the United Jewish Communities’ General Assembly. Under the theme of “One People, One Destiny,” the GA, held at the Gaylord Opryland Resort in Nashville, looked to tackle a myriad of challenges facing the organized Jewish community in North America, including:
This last concept--celebrating new and younger leaders--pervaded much of the proceedings. There were many young speakers at the plenary and breakout sessions, and there was a very large delegation of college and university students in attendance.

Under the guidance of Professor Saul Andron, Wurzweiler students were personal benefactors of this special attention. Professor Andron arranged an informal question and answer session with three Wurzweiler alumni who currently hold executive positions in their respective Federations (Judah Isaacs in Detroit, Marc Terrill in Baltimore and Max Kleinman in MetroWest, NJ). This session actually led to an impromptu invitation from Marc Terrill to a Baltimore Federation reception, attended by Baltimore professionals and lay leaders, later that evening.

Wurzweiler students met in a special session with volunteer leaders and professionals of the Jewish Federation of Greater Atlanta. After presentations from the chief professional and volunteer officers of the federation, students were paired with individual members of the Atlanta federation delegation for more in-depth discussion of the issues facing this rapidly growing Jewish community and the challenges the federation faces to implement new strategies to engage Jews in Jewish life. There was also time for a more intimate conversation between students and the professionals of this community about their career choices.

The Wurzweiler students returned energized from this conference with added enthusiasm for the Certificate program and commitment to pursue leadership positions in the Jewish community.

Summing up her experience, first-year student Samantha Leapman noted that...

The GA was an opportunity to join our fellow students in seeing our classroom learning experience come alive. With Dr. Andron’s help, we learned about the importance of creating new and innovative ways to engage the Jewish community, paving the way for our future involvement in the larger Jewish community.

Each year, the G.A. provides an ongoing opportunity for young professionals in the field to open their eyes to the depth, strengths, and gaps in the field of Jewish Communal Service. Our trip again reminded me of the enormous but exciting roles there are for us to take on in the field.

(Thanks to Yehezkel Jesin for reporting this story.)
Posted by The CyberProf at 8:57 AM No comments:

Wednesday, November 7, marked the premier of Wurzweiler's Social Work in the Cinema program. No klieg lights, paparazzi, or fans straining at velvet-covered ropes, but a respectable turnout of students and almuni in Belfer Hall, room 921, where the movie was shown using a a newly installed projector and sound system of exceptional quality. The film was Three Approaches to Psychotherapy (1965), a classic documentary featuring Carl Rodgers, Fritz Pearls, and Albert Ellis. In the movie, each therapist spends a half hour working with a new patient, a woman named Gloria.

After the movie, Wurzweiler faculty member, Dr. Joan Beder, contributed her considerable clinical experience to a panel discussion about the film. The audience was intrigued by Dr. Rodgers' warmth and empathy, and startled--to say the least--by the confrontational style of Dr. Pearls. Because most of the audience was generation X and Y, they were unfamiliar with Pearls' books and the style of therapy he created, called "Gestalt."

The next film showing, on February 6th at 4:00 PM, will be My Name is Bill W., (1989) an HBO production with James Woods and James Garner. Everyone is welcome, and if a sufficient number of people RSVP, we will be able to provide fresh popcorn from an old fashioned movie theater popper. Movies and popcorn are free of charge. Any questions, email thecyberprof@gmail.com.
Posted by The CyberProf at 12:32 PM No comments:

New Book From Dr. Strug and Others About US Travel Policy, Effect on Cuban-American Families

Love, Loss and Longing: the Impact of U.S. Travel Policy on Cuban-American Families, authored by Jeanne Parr Lemkau and Wurzweiler faculty member, David Strug, was recently co-published by the Latin American Working Group Education Fund and the Washington office on Latin America. This large format book, printed on fine paper, llustrates, through photographs by Nestor Hernandez jr. and Juan E. Gonzalez Lopez, the divisive effcts of US policy toward her island neighbor.

Posted by The CyberProf at 10:05 AM No comments: