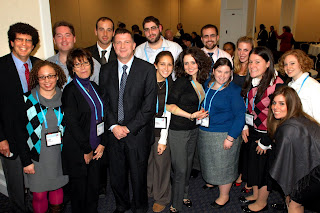 Sixteen Wurzweiler students attended the annual General Assembly of the Jewish Federation of North America in Washington, D.C. in mid-November alongside over 3,000 lay leaders and professionals from the US and around the world. The students heard prominent political figures from Israel and community leaders of Jewish organization, large and small, addressing issues vital to the Jewish community. Forum topics included:

All these topics were filtered through the lens of the challenging economic realities facing the Jewish federation system today.

Benjamin Netanyahu, the Prime Minister of Israel, speak about the Middle East peace process and his commitment to revive negotiations with Israel’s Arab neighbors and the Palestinians. Netanyahu emphasized three themes: creating a lasting peace between Israel and the Palestinians, disarming Iran’s nuclear capabilities and reducing Israel’s oil dependency.

The delegates were also privileged to hear Foreign Minister Ehud Barak, Natan Sharansky, the recently elected Chairman of the Jewish Agency, and Ram Emanual, President Obama’s Chief of Staff. Each emphasized themes of Jewish unity, support for a secure and flourishing Israel, and the importance of the Jewish Federation in meeting the needs of Jewish communities locally, in Israel and around the world.

One of the most moving moments of the conference was the presentation by Torah for Troops, an organization dedicated to getting Torah scrolls to American soldiers on the front lines. Several members of the armed forces joined a sofer, a scribe, to recite a blessing and then complete a letter in the Torah scroll. This kosher Torah scroll is specially designed to be small, light-weight and portable so military chaplains are able to bring it to serve the religious needs of Jews serving in the armed forces in far-off bases around the world.

Thanks to Dr. Andron's planning, the students attended several private networking sessions including a lunch meeting with Wurzweiler alumni, who spoke about their Wurzweiler education and their careers in the Jewish Federation system.

Second year students incorporated their experiences at the General Assembly into their classroom learning through a unique learning collaboration with the Greater Washington DC Jewish Federation’s Leadership Development Department. They met with professional and lay leaders from the Federation to learn about the demographic profiles, interests, and needs of young Jewish adults. These students will analyze the data in order to to create a needs assessment questionnaire for the Jewish young adults in the Washington DC area.

The GA conference exceeded the expectations of many of the students and served as an invaluable learning and networking experience.

Thanks to Alizah David, guest editor, photograph by Robert A. Cumins

Posted by The CyberProf at 11:07 AM No comments: 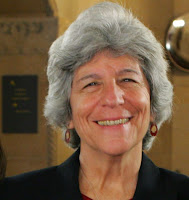 Dr. Joan Beder was quoted in an Indianapolis Star article about doctors forming partnershi[ps with lawyers in order to address patients' social and economic issues without impacting negatively on their health.

Read the article...
Posted by The CyberProf at 9:37 AM No comments:

The Connecticut Health Foundation the state’s largest independent health philanthropy association, has announced its 2010 Health Leadership Fellows, and Rev. Jerry Street is one of the 22 Connecticut residents to recive this honor. According to Patricia Baker, the President and CEO of the foundation, each of the the Fellows possesses the qualities and experience necessary to effect changes in Connecticut's health systems that will improve the health of our state's residents.
Read more about the program.
Visit Rev. Streets' blog
Posted by The CyberProf at 11:36 AM No comments: